Did you know that 2017 marks the 100-year anniversary of the invention of S.O.S Soap Pads? 100 years! When S.O.S Soap Pads were introduced, electricity and indoor plumbing were still considered luxuries, the Eiffel Tower was the tallest structure in the world, and women didn’t yet have the right to vote. 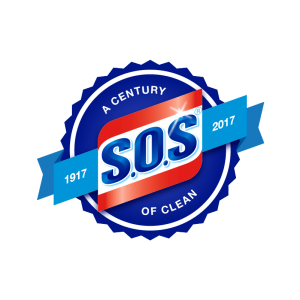 If you’ve looked around our website, you’ll know that S.O.S Soap Pads were invented by a cooking utensil salesman named Irwin Cox. He wanted something to make his products memorable, so he designed soap filled scrubbers in his basement, dipping balls of steel wool into soap and letting them air dry. He gave a couple away with every sale, so customers could keep their new pots and pans clean and polished. It wasn’t long before his homemade soap pads became more popular than the cooking utensils he was selling! Cox’s wife called the pads S.O.S – which stood for “Save Our Saucepans” – and the rest is history!

Fast forward 100 years and S.O.S Soap Pads are a trusted scrubbing powerhouse for millions of people worldwide, ‘saving’ everything from pots and pans to shower walls, stovetops to patio furniture, golf clubs to plastic shoes… and everything in between. (check out the uses and tips page of this website if you want to see just a few of the ways S.O.S Soap pads and other S.O.S products can be used around the house, garage, workshop, and patio!)

As we celebrate a century of quick and easy cleaning, we thought it would be fun to take a look back at what life was like 100 years ago:

Lucky for us, both housework and the world have come a long way since 1917. But 100 years later, S.O.S Soap Pads remain a proven cleaning solution for people worldwide. We’re so proud to be celebrating a century of clean and are very grateful to the millions of people who rely on us daily to make their toughest cleaning jobs easier.  We’re so honored to be America’s #1 selling Soap Pad* and we’re already looking forward to the next 100 years.  Happy Scrubbing!

*Based on IRI sales data